Contents Summary show
In her 70 years, Sandy Linter has lived many lives as a makeup artist.
Create a Glowing Base
Cover Up Conservatively
Warm Up the Skin
Sculpt and Lift Subtly
Play Up the Eyes
Take It Easy on the Brows

In her 70 years, Sandy Linter has lived many lives as a makeup artist.

In 1969, the Staten Island-born visionary began her career working for famed celebrity hairdresser Mr. Kenneth in New York City, his clients Jackie Onassis and Barbara Walters serendipitously ending up in her makeup chair. In the ’70s, she struck out on her own, landing high-profile editorial work with photographers such as Irving Penn, Helmut Newton, and Arthur Elgort while embodying the era’s work-hard-play-hard mentality and becoming a dazzling fixture at Studio 54. And by the ’80s, she was regularly painting the faces of supermodels Iman, Cindy Crawford, and Patti Hansen for major campaigns and Vogue pages. And since then, Linter hasn’t slowed down. In fact, with age, her skill set has grown, as she’s continued to work with a laundry list of famous faces, including Christie Brinkley, Debbie Harry, and Rita Wilson. 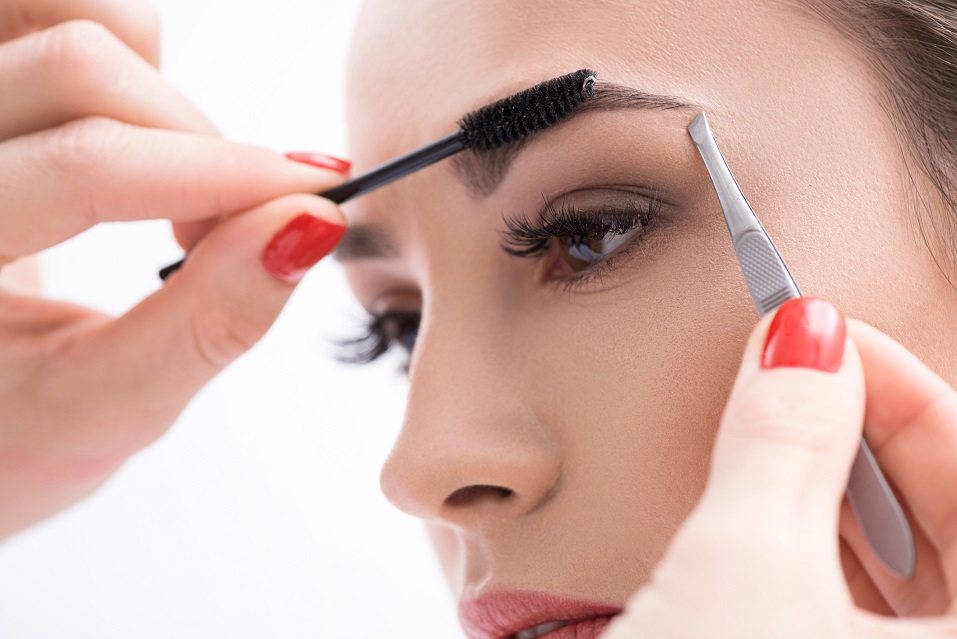 I can remember being young Sandy the makeup artist and then middle-aged and the further on then middle-aged…” she laughs, about her personal evolution over her decades-long career. At a time when the fashion industry is, at long last, embracing women above a certain age, Linter believes there’s no time like the present for older women not just to embrace makeup—but have fun with it. “There are no rules!” she insists, with just one addendum: “Wear the makeup, don’t have it wear you. Instead of trying to hide flaws, enhance what you’ve got.” From natural-looking coverage to subtle tricks that make the eyes pop, here’s Linter’s guide to ageless beauty.

Create a Glowing Base

Needless to say, following a dedicated skin-care routine—cleansing, moisturizing, and exfoliating—is an essential strategy for achieving a healthy complexion, especially over time. Before applying makeup, spread on a veil of a hydrating yet weightless moisturizer on clean skin. “Heavy moisturizers are just not compatible with makeup,” says Linter. According to the pro, La Mer’s Crème de la Mer Moisturizing Cream strikes the right balance between nourishing the skin for a dewy finish without compromising the layers that follow. After the moisturizer sinks in, you can target areas with fine lines or dry patches with a quick-absorbing primer, like Dermablend’s Insta-Grip Jelly Face Primer with its smoothing gel texture, as desired.

You can’t hide wrinkles, so don’t try to, because you’re only going to draw more attention to them,” says Linter. To even out skin tone, she suggests using a moist sponge or foundation brush to apply a sheer, hydrating foundation, like Kevyn Auction’s The Etherealist formula, so that it “doesn’t look plastered to the face.” Then, use a robust yet lightweight creamy concealer that blends easily—Giorgio Armani’s High Precision Retouch Concealer is her go-to—on the more ruddy or hyperpigmented areas. For the eyes, concentrate on the under eyes and tear ducts to effectively counteract dark circles. “Most women get darkest on the inner corner of their eye as opposed to the outer corners where you smile and have the laugh lines,” she explains.

Warm Up the Skin

When choosing a foundation or concealer shade, one might be inclined to seek out an exact match, but Linter suggests going a shade or two warmer to ensure you don’t look washed out. “If it’s too matchy-matchy, it can age you,” she says. And in that case, it’s essential to extend coverage beyond the visage. “After the face, take a foundation brush and blend very slightly around the neck, so it doesn’t look obvious,” instructs Linter. Then comes bronzer—and not just for the cheeks. “I use it on everyone over 50 because it warms up the skin in a natural way,” she explains, adding that she’ll sweep Serge Lutens’s Complexion Perfector under the cheekbone, down the sides of the nose, across the forehead, and under the jawline for a chiseled glow.

Smiling while you apply blush has long been cited as a universal, tried-and-true technique, but it’s not as effective as you age, says Linter. “Instead of on the apples of the cheeks, I like to apply blush at the top of the cheekbone and then blend inward. You want to point the attention up to enhance.” As for shades, she prefers muted rosy shades like MAC’s Powder Blush in Prism. “I’ve been using it since the ’90s!” she says. For extra impact, Linter will layer—first with a cream formula, like Kevyn Aucoin’s The Creamy Glow, and then finish it off with a powder. “Sometimes just the cream is enough,” she says. As for setting powder, it’s a step Linter usually skips but looks to Dermablend Banana Powder if necessary.

Play Up the Eyes

You want to open up the eyes and make them look as big as possible because it’s more youthful,” explains Linter. The first step? Curl the lashes with an eyelash curler, starting right at the root. Next, you have to pick the right mascara, which requires trial and error. “There are very thickening formulas that don’t work on older women whose lashes have become thinner and more brittle,” she explains. “When they don’t work, the lashes start to clump, and there’s nothing more aging than clumpy lashes on a woman over 50.” Currently, Chanel’s long-wearing Inimitable Mascara boasts a flexible pronged brush and provitamin B5-laced jet-black formula that nourishes the hairs while providing natural definition, It is her favorite when working with older clients.

As for liner, Linter makes a point of debunking a long-held myth. “In the old days, they used to say only use brown, but it’s a falsehood that women over 50 can’t use black,” she insists. “You need to create a contrast between the eye color and liner. Brown can make you look tired if it’s not the right brown.” Shade-wise, no woman can go wrong with Lancôme’s Le Crayon Khôl in Black Coffee. “Absolutely anyone can use it!” While mascara and eyeliner skew towards basic steps, eyeshadow is more of an accessory that plays up your personal style if you want it to. But proceed thoughtfully. “Don’t take a shadow and just plop it on the center of the lid,” she instructs. “Using a small eye brush, start from the outer corner of the eyes and work inwards so that the color gets gradually lighter. It’ll give you a bigger, wide-eyed look.”

Take It Easy on the Brows

First, focus on keeping the brows full naturally. “You want to save every eyebrow hair you have, so instead of tweezing, trim them,” says Linter, adding that Revitabrow and Revitalash are incredible growth formulas she uses on herself. Linter is partial to feather light hair-like strokes of Troy Surratt’s Expressionist Brow Pencil to fill in arches. “It’s thin enough for drawing on a hair here and there without looking too artificial,” she says. “[The shades] are so natural-looking.

Balance Out the Lips”As you get older, the lips can become asymmetrical, and it can be aging,” says Linter. You can balance out the mouth using a lip pencil in a your-lips-but-better shade, but the formula must have the right amount of slip. “You want it to be so soft that the minute it touches the skin, it glides on,” she explains, adding that NARS’s Velvet Matte Lip Pencils are the best in this regard. To create symmetry, Linter recommends drawing on a pencil in four separate strokes, always starting from each of the four outer corners and drawing towards the cupid’s bow or to the center of the bottom lips.

That way, your lip is going to be more balanced,” she says. Apply lipstick in the same fashion, then use a lip brush to slightly diffuse the edges for a softer look. After painting on a matte lip, Linter will sometimes add a gloss on top to add shine and definition, but never one that’s too heavy or sticky. This part of the process is up to the wearer; Linter emphasizes, “the finish is purely tasted.”

Comments Off on A Guide to Ageless Makeup for Women Over 50, According to an Industry Veteran